Lockdowns only reduced Covid Mortality by about 0.2%, according to Recent Analysis

02 February 2022 - Posted in General by Admin with comments

According to a recent study performed by the John Hopkins Institute, Covid lockdowns across the world only led to a reduction of about 0.2% in mortality.

The chickens are coming home to roost, as all us lockdown-sceptics predicted from the beginning of this farce.

12 December 2021 - Posted in General by Admin with comments

I didn't need to watch Boris Johnson's address tonight to know he would be spouting rubbish from beginning to end. And rubbish it proved to be.

The evidence points to one thing: "omicron" is just a poxy cold virus which does no harm. The liars will say there are a few people in hospital with it. Yes, because they have a broken arm and just happened to test positive.

The numbers are so small they are utterly insignificant. 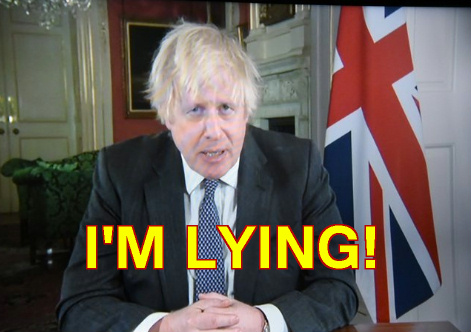 However the politicians in charge want you to think something else. They want to keep the fear going. They want to get you "boosted" against this thing. They want to extend this phony "pandemic" for as long as possible in order to complete their diabolical plan.

It must fail. However the sheep must wake up, stop wearing their silly masks and refuse to comply with any of it.

What we need is rocket boosters pointed at Parliament, not drugs.

This week the "Labour" Party will vote for medical apartheid by agreeing with vaccine passports, against all the scientific evidence. These woke juveniles are as useful as a chocolate teapot. "Labour" and the "Conservatives" are just two sides of the same behind. They are tacitly agreeing with the bile that has been spewed by yet more public figures that have emerged from the woodwork over the last few days. It's amazing how many fascists there are still around in 2021.

All these MPs must be kicked out by the people when the opportunity arises. No excuses. No tactical voting. OUT.

Peter Hitchens on the Death of Freedom

Here is Peter Hitchens speaking on Unlocked about the slow death of freedom in the UK: